The Q300 is available in three formats: the turbomolecular-pumped Q300T T is ideal for coating both oxidising and non-oxidising metals onto large specimens (up to an 8” wafer); the Q300R T is a low-cost, rotary-pumped version for noble metals only; and the Q300T D is a dual head system that allows independent sequential sputtering of two metals without the need to break vacuum – making it ideal for many thin film applications.

Sales & Marketing Director Mike Wombwell believes this large-format series will build upon the success of the Q150 series that was launched during 2009/10.

“Flexibility and economy are key concepts with the Q300 series. Although primarily designed for large specimens, sputtering can be limited to a single source to allow economical sputtering of smaller specimens, such as SEM stubs.

”  Featuring an intuitive colour touch screen, plus a range of easy-to-change specimen stages, the Q300 series combines state-of-the-art design with an exceptionally high level of performance and flexibility. Among the options is a film thickness monitor for measurement and control of coating thicknesses. 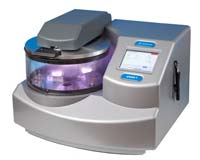